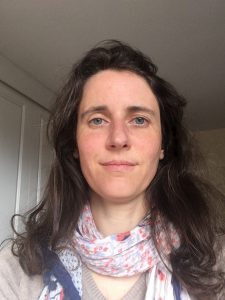 Graduated from Engineering School Ecole Centrale de Lyon (ECL, France) in 2003, Clémentine Béchet first worked as a research engineer on mathematical modeling of the optical interferometer of the European Southern Observatory (ESO, Chile) and on algorithms to analyze interferometric data. She began in 2005 her PhD in collaboration between the Centre de Recherches Astrophysiques de Lyon (CRAL, France) with Michel Tallon and the ECL with Gérard Thomas. She obtained her PhD degree of ECL in 2008 with her work on fast reconstruction algorithms and optimized control of adaptive optics (AO) for giant telescopes.

During her first two postdoc positions at the European Southern Observatory (ESO, Germany) and CRAL (France), she extended her research to solve more complex AO problems (tomographic reconstruction, use of lasers, and self-calibration). Arriving in Chile in 2013, she extended her research to different inverse and control problems with applications in other areas, such as laser beam shaping algorithms, close-range photogrammetry and radio telescope beam estimation. In 2016, she obtained her current position as an Assistant Professor of the UC Engineering School. She is part of the group of professors who created the new Institute of Mathematical and Computational Engineering UC (IMC).

Between 2005 and 2013, she was constantly involved in European research contracts for the study, design and conception of new generation AO. C. Béchet is currently leading a Fondecyt Iniciación project (2018-2020) with collaborations established with international observatories ESO, Gemini Observatory and Giant Magellan Telescope Observatory. She also has collaborators in other faculties of the Pontificia Universidad Católica (Chile), at the Université Claude Bernard Lyon (France), the Astrophysics Laboratory of Marseille (France), ONERA (France), at the Institute of Astrophysics of the Canary Islands (Spain), at Durham University (United Kingdom), at LUT University (Finland), at Helsinki University (Finland).

Béchet has supervised and co-supervised students and postdoctorates at CRAL (France), at ESO (Germany) and at the UC School of Engineering (Chile). Her interdisciplinary work leads her to supervise diverse profiles, from mathematical engineering (or applied mathematics) or electrical engineering to astronomy, optics and computer science.

In terms of transfer to the society, her work is of interest both at a theoretical level seeking to develop optimal methods, and at the level of a user who wants to use it as a solution for its application. Her work has led to the development, with her CRAL collaborators, of LITpro software algorithms (http://www.jmmc.fr/english/tools/data-analysis/litpro/) for optical interferometry and FRiM3D algorithm for fast tomography in AO. FRiM3D is still used and considered for more than 10 years by ESO as a reference method for the design of all its new adaptive optics. Last but not least, since 2017, C. Béchet created with Prof. A Guesalaga, an annual intensive professional course of adaptive optics for engineers, technicians and astronomers from the international observatories in Chile. To face of the ubiquity of these instruments today, the observatories need to train their staff to adaptive optics, and there was no solution to do this locally, in Chile, before the creation of this course.