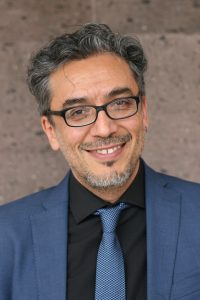 From October 2007 to July 2008 he was visiting scholar at the University of Washington. Since August 2008 he has been professor at the Universidad Técnica Federico Santa Maria, where nowadays is associate professor. During 2019 was scientific expert LabEx CIMI, at the Institut de Mathématiques de Toulouse, Université Paul Sabatier, France.

Mercado has published 16 scientific articles in journals with peer review. He has been the principal researcher of three FONDECYT projects, and one Math-Amsud project. He was deputy director of the associative project PIA-Conicyt ACT1106: Analysis of Control Problems and Applications (2012-2014). He has a scientific network that includes researchers from Chile, Brazil, México, Colombia, Spain and France.

He has supervised seven undergraduate theses of Mathematical Engineering, and four master theses. He has organized several international scientific meetings, from which stand out the Workshop on Inverse Problems and Applications WIPA 2010, the school and workshop PASI on Control and Inverse Problems on PDE, PASI-CIPPDE 2012, the Workshop on Control Systems and Identification Problems COSIP 2015 and the joint congress of Sociedad Matemática de Chile and Unión Matemática Argentina SUMA 2016.

As administrative commitments, he has been the head of the Mathematic Department of UTFSM from March 2012 until April 2014. He has been in charge of the undergraduate engineering mathematical program from March 2014 until February 2017, and part of the Academic Committee of the PhD program in Mathematics of universities PUCV, UV and UTFSM (2017-2018). From December 2016 to December 2018 was part of the board of directors (as Secretary) of the Sociedad Matemática de Chile SOMACHI.