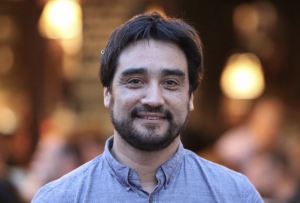 Mathematical Civil Engineer from the University of Chile (1994), obtained the Master’s degree (DEA) in Numerical Analysis, Scientific Calculus and Non-Linear PDE’s at the Pierre et Marie Curie University (1995) and the PhD in Applied Mathematics from the Ecole Polytechnique in Paris, France, in 1998.

The year 1999 is incorporated as a researcher in the Faculty of Physical and Mathematical Sciences of the University of Chile, being promoted to the degree of Professor in 2013 and Associate Member of the Center for Mathematical Modeling since 2000. He has worked in various positions of responsibility as Teaching Chief, Director and Deputy Director of Department, twice-elected Faculty Advisor, member of the Faculty Evaluation Committee and several times elected as a member of the Department Council and the Scientific Committee of the Center for Mathematical Modeling.

In addition to the scholarships obtained during his undergraduate and doctoral studies (Angel Faivovich award for the best student of the Instituto Nacional, Alpha scholarship of the European Economic Community and President of the Republic of Chile scholarship), during his career he has received awards among the which counts a red position of the CNRS in 2005 and the award to the best teacher of the University in 2013. He has been a visiting professor at various universities (in the United States and Europe) and invited as a speaker to various international conferences (in the United States, Europe, Asia and Latin America) and national (CMM, DGF, DAS, PUC, UTFSM, SOMACHI, SUMA).

His main line of research has been that of control and inverse problems in PDE’s. It has led to the development of important applications in geophysics, medicine and astronomy and has trained young researchers with capacities to innovate in this area and its applications. Thus, he has published 52 original articles indexed in WoS, with an h index of 12 and 525 citations. In Scholar Google has an h index of 17 with 1053 citations. His articles are of theoretical mathematics (on the issue of control and inverse problems of PDE’s using Carleman inequalities, wave propagation and photon transport, in addition to mathematical analysis of fluid-structure and multi-scale problems) and in applications of mathematics in geophysics (air pollution, seismic and lithospheric flexure), medicine (nuclear medicine, MRI, microscopy and genomics) and astronomy (interferometry and protoplanetary disks).

He has directed 11 PhD theses (8 completed and 3 in progress) and some of these graduate students are currently academic researchers in Chile (Federico Santa María Technical University, University of Santiago) or abroad (CNRS). He has also directed 21 theses of Mathematical Engineering, 16 of them completed, 9 of them simultaneous with Master and has co-directed 7 theses of Master in other disciplines all completed.

He has directed 5 consecutive regular Fondecyt projects and 5 regional cooperation projects with France (2 ECOS-Sud, 1 STIC-Amsud and 2 MathAmsud). He participates and has actively participated as a researcher in various projects in other areas including: geophysics, biotechnology, climate change, medical applications and mathematical education (FONDAP, FONDEF, Millennium Institutes and Nuclei, Anillo, ECOS, MathAmsud, IAI). He has been a member of the Mathematical Modeling Center since its inception and in its stages Fondap 2000-2009, Basal 2009-2018 and Puente-Basal 2019-2021. Its network of collaborators includes researchers from Chile, Argentina, Brazil, France, Spain, UK, Australia, the Netherlands, Finland and the United States.

In the field of scientific dissemination, he created the series of scientific videos Beautiful Concepts, a poetic walk through mathematics. A video production for the general public about five mathematical concepts with the conduction of Cristián Warnken that can be freely found on YouTube. He was also editor of the book 50 years Building Mathematical Engineering in Chile, published in 750 copies, 168 pages in Santiago de Chile, 2015, which tells the genesis of Mathematical Engineering in Chile. He is also the author of the book Numerical Analysis oriented as a tool for math teachers, Editorial J.C. Sáez, 2000 copies, 168 pages, 2011 that develops applications such as the approximation of the pi number and the resolution of linear systems to solve problems of magic matrices and medical tomography.