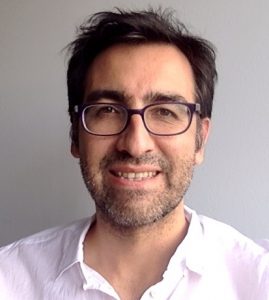 Eduardo Cerpa was born in Santiago, Chile, in 1979. He received the engineering degree from Universidad de Chile in 2004, the M.S. degree in mathematics from Université Pierre et Marie Curie in 2005, and the Ph.D. degree in mathematics from Université Paris-Sud 11 in 2008. Next, he was a Research Scholar at University of California, San Diego and from 2009 until 2019 he was an Assistant and then Associate Professor at Universidad Técnica Federico Santa María. He currently is an Associate Professor in the Institute for Mathematical and Comptuational Engineering at Pontificia Universidad Católica de Chile. Eduardo received in 2015 the SIAM Activity Group on Control and Systems Theory Prize. He serves as Associate Editor in the journals Systems and Control Letters, SIAM Journal on Control and Optimization, and Mathematics of Control, Signals and Systems. His research interests include control theory, partial differential equations, and inverse problems.